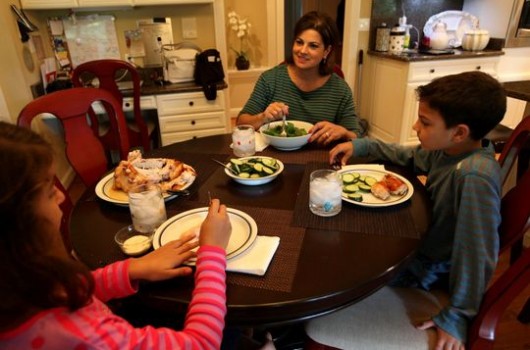 Silvana Davis was 16 when breast cancer took her mother.

Now a mother herself, the 41-year-old Brighton, Mich., woman is doing everything she can to make sure that she does not face the same diagnosis.

Although we can’t change our genetics, mounting research underscores the importance of taking steps to beat back the odds of breast cancer, a disease that this year will be diagnosed about 232,340 times and will cause about 39,620 deaths, according to the American Cancer Society.

The research is clear: Cut back the alcohol. Approach hormone replacement therapy with caution. Shave off calories, too.

If the body is the interface between genetics and environment, food is a “buffer,” said Dr. Sofia Merajver, director of the Breast and Ovarian Cancer Risk Evaluation Program at the University of Michigan’s Comprehensive Cancer Center.

“It can protect us or hurt us, depending on what we eat,” she said.

A growing body of research has strengthened the link between exercise and breast cancer risk, especially in postmenopausal women. One recent study of more than 95,000 women found that increases in physical activity after menopause lowered breast cancer risk by 10 percent, according to the American Cancer Society’s Breast Cancer Facts & Figures report.

It’s a lot of the same nutrition advice used to control other chronic diseases, making the lifestyle change “a win-win-win,” Merajver said.

Davis’ mother was 35 when she was diagnosed with breast cancer. When Davis and her three sisters approached the same age, “we all just kind of freaked out,” she said.

Davis, a physician’s assistant at U-M, decided to undergo genetic testing to see whether she carried a mutation of the BRCA gene, the same one that Angelina Jolie carries and that prompted the actress to undergo a double mastectomy earlier this year.

The BRCA1 and BRCA2 genes help suppress tumors and stabilize a cell’s genetic material. A mutation of those genes boosts the risk for cancer. About 12 percent of women in the general population will develop breast cancer sometime during their lives; the risk jumps to 45 percent or more for those who inherit a BRCA mutation, according to the National Cancer Institute.

While waiting nearly two months for the results of the genetic tests, Davis began to make lifestyle changes.

She typically ate the right foods, she said, chuckling: “I’m Italian, it was about portion control.”

Davis stopped finishing the food on the plates of her two children, 8-year-old Nico and 10-year-old Elena. And while usually involved with their activities, she now threw herself into them even more.

As it turned out, Davis doesn’t carry a BRCA mutation and her mother may not have either. But the news didn’t send cancer out of her mind completely.

She shed 15 pounds from her 5-foot-4-inch frame, a loss that helped her feel like she has an edge on the disease that killed her mother: “I feel like I have a bit of control over this.”

There’s a growing awareness of trying to prevent cancer, not just treating it after diagnosis, Merajver said. But patients are often confused.

They’ve heard advice from friends and others about preventing cancer — taking this pill or avoiding this particular food, for example. Sometimes, it’s just “quackery, like snake oil,” Merajver said.

Other times, it’s from very preliminary research that only hints at a possible link, but that will take much more work to confirm.

“Just because there’s a study, it doesn’t mean there’s validity to it,” said Lisa Chism, a nurse practitioner and director of the Women’s Wellness Clinic at Detroit’s Barbara Ann Karmanos Cancer Institute.