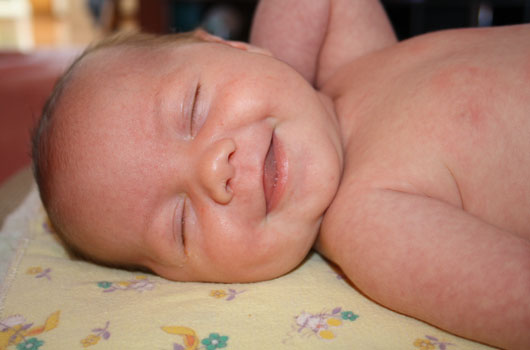 Babies who had a lullaby played to them regularly while still in the womb recognized the song months after birth, a study has found.

The researchers had 10 expectant mothers play “Twinkle Twinkle Little Star” loudly multiple times per week throughout their last trimester of pregnancy. A few days after birth, they took electroencephalogram, or EEG, recordings of each newborn’s brain by using 12 electrodes scattered over different regions of the head.

Upon hearing the lullaby again, they had significantly larger brain responses than a control group of newborns who had not been exposed to the song. The experiment was repeated after four months with similar results.

Study co-author and University of Helsinki psychologist Minna Huotilainen refers to this phenomenon as “preconscious learning.” The babies have no awareness of it — no “Oh, that old song from my intrauterine days” — but somehow their brains can still pick up on the fact that they have heard it before.

“They recognize the memory, and their brains react to it,” said study co-author Eino Partanen, also a University of Helsinki psychologist. “But do we mean memory like how we have in adults? No. This is more like familiarity.”

Also, the scientists found that the more times a mother played the recording for her unborn child, the stronger the electrical signal from the baby’s brain would be.

When the researchers played a modified version of “Twinkle Twinkle Little Star,” the babies seemed to notice when that was amiss. The EEG was fast enough to catch note-by-note neural responses, and when a wrong note was played, their brains would react differently.

“It is a matter of noticing a difference between what you hear and what you should be hearing,” Partanen said. “Memory plays a part in that.”

he study was published online Wednesday in the journal PLOS One.

“It’s plausible since late-term fetuses display the full repertoire of abilities that newborns have,” said Johns Hopkins developmental psychologist Janet DiPietro, who was not involved in the research. “They can both learn.”

Key structural parts of the ears develop throughout the first 20 weeks of gestation, and neurosensory connections going from the ears to the brain come in several weeks later.

“By the start of the third trimester, all fetuses should be able to hear,” Partanen said. “The question was, could we get the fetuses to learn something new?”

An early study on auditory fetal learning – titled “Fetal ‘Soap’ Addiction” – looked at mothers who had regularly watched a certain soap opera while pregnant. Several days after birth, their babies appeared to recognize the soap’s theme song whenever it came on. They would stop wailing and instead focus rapt attention toward the television.

Although many anecdotal or behavioral studies have been done, Partanen and his colleagues wanted to back up the vague speculation of fetal learning with quantitative electrical markers of the brain at work. Using electroencephalography, they aimed to capture measured neonatal brain responses directly resulting from stimuli, called event-related potentials.

Partanen suggested that expectant mothers could sing a certain song to their unborn child and that later on, if the baby is crying or stressed, singing the same melody could serve as a soothing reminder of their time in the womb.

“The voice of the mother is the most salient sound in the womb,” he said, and could heighten the effects seen in the study. It is transmitted through the bones and can drown out external sounds, rendering singing more effective than loud recorded music.

But DiPietro, who has been doing fetal research for 20 years, warned mothers not to go overboard with attempts at fetal learning.

“Just because fetuses can learn doesn’t mean you need to teach them things,” she said. “The intrauterine environment has plenty of stimulation.”

Expectant mothers often ask her if they should listen to classical music while they are pregnant, thinking it could make their babies smarter or more musically inclined.

“I ask them, ‘Do you like classical music?’ ‘No, not really.’ So don’t listen to it!” DiPietro said. “The best thing for the fetus is to keep yourself healthy.”