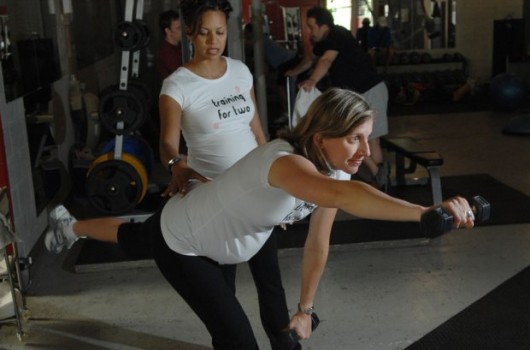 Exercising during pregnancy changes the fetal brain in ways that may boost a newborn’s brain functioning for life, new Canadian research suggests.

In what is being described as the first study of its kind in humans, University of Montreal researchers found that the brains of babies born to women who exercised moderately throughout their pregnancies appeared to mature more rapidly.

Eight-day-old newborns had brains as active as those of eight-month-olds.

The findings suggest that 20 minutes of exercise, three times a week, enhances a baby’s brain development and its “plasticity,” meaning the ability to make new connections, according to research to be presented Monday at Neuroscience 2013, the annual meeting of the Society for Neuroscience in San Diego, Calif.

The team hopes the findings will encourage women “to change their health habits, given that the simple act of exercising during pregnancy could make a difference in their child’s future,” said lead author Dr. Dave Ellemberg, a professor in the department of kinesiology at the University of Montreal.

The study was motivated by experiments in rats, published by other researchers a decade ago, that suggested maternal exercise produces a higher density of neurons in the hippocampus of the fetal brain. Rat pups born to mothers who exercised on a running wheel performed far better at birth on tasks that require memory than pups born to sedentary mothers.

Ellemberg wondered: Could the phenomenon hold true for humans, too?

For the study, 18 women in their second trimester of pregnancy were randomly assigned to an exercise group or a sedentary group. Ten women in the exercise group were asked to exercise a minimum of 20 minutes, three times a week, at a moderate intensity that would leave them feeling slightly short of breath. The eight women in the sedentary group were asked not to exercise. All the women had equal levels of education, socio-economic status and health habits.

Eight to 12 days after the babies were born, researchers measured the activity of neurons related to memory. The babies were fitted with an electrode cap that measured and recorded their brain activity via an EEG, or electroencephalogram

The researchers waited for the babies to fall asleep in their mothers’ laps, then measured their unconscious responses to high- and low-pitched sounds. Some of the sounds were repeated over and over, others were more rare.

“We found that the babies who were born from the mothers who were active had a much more mature brain response,” Ellemberg said. “The brain response corresponded to that of babies of six to eight months of age.”

The researchers have begun testing the babies’ cognitive, motor and language development as they reach their first birthdays, to determine whether the differences remain.

“It’s fascinating,” said Dr. Jon Barrett, a professor of obstetrics at the University of Toronto and head of maternal fetal medicine at Sunnybrook Health Sciences Centre. Barrett was not involved in the study.

It’s long been known that exercise in pregnancy is good for the mother, he said. Exercise lowers the risk of pregnancy-related high blood pressure and diabetes. Pregnancy tends to be easier, and labour shorter.

“We also know now that what happens to the fetus (while) in the mother has longstanding implications for the baby’s health into adulthood,” said Barrett.

For example, babies that don’t grow well in the womb have a higher risk of developing adult hypertension.

How a baby’s brain is affected by the mother’s exercise, or why, remains a mystery

It’s a concept known as fetal patterning. Researchers are studying babies, from the womb into adulthood, to see if they can find “patternings” that will affect the baby’s chances of developing diseases such as hypertension, diabetes and even cancer, as they grow older, Barrett said.

“What we’re seeing here [in the Montreal study] is a little glimpse, a hint of how something like exercise can affect the neural patterning of the baby.”

How it happens, or why, remains a mystery.

When women exercise during pregnancy, the fetal heart rate also increases. “So, it’s as if the baby is also working out while his mom is working out,” Ellemberg said.

That might increase oxygen levels to the baby’s brain, nourishing neurons and improving brain development.

Exercise also increases levels of serotonin, dopamine and other neurotransmitters that are important for memory and attention, Ellemberg said.

In the absence of any health concerns, ‘pregnant women should go ahead and be active

The study’s biggest limitation is its size, involving just 18 women. However, the early findings suggest that exercise during pregnancy might influence the “neuronal circuitry” of the developing fetal brain, Ellemberg said.

Even today, “we hear some doctors warning their patients [pregnant women] not to exercise,” he said. But, in the absence of any health concerns, “women should go ahead and be active,” he said.